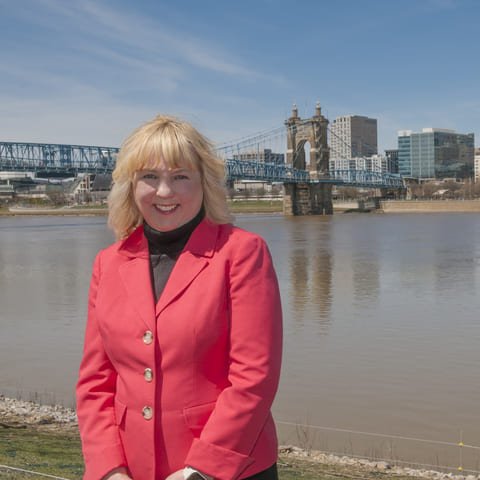 Jodie Drees Ganote is licensed to practice law in Ohio; Kentucky; Southern District of Ohio; and the United States Supreme Court. She was selected as a Ohio Super Lawyer for 2023. Jodie served as a Trustee for the Cincinnati Bar Association over a five-year period and led the CBA, Women Lawyers’ Section over the period where it was awarded and recognized as the leading section for the bar association. Jodie has been a leader on the Cincinnati Lawyers’ Club for over a decade as the Vice President. Her leadership has been instrumental in transitioning the non-profit to a level where it annually donates thousands to local indigent children for holiday toys and winter coats. She has been a member of GLSA for over five years and has recently been selected to join the team as a Board Member.

Jodie began her legal career by building her firm from the ground up. Her practice is focused on criminal defense; DUI/OVI; and traffic matters. She can be found in courtrooms anywhere in Ohio or Kentucky litigating charges as serious as manslaughter, rape, felonious assault, robbery, drugs, and weapon charges to name a few. In the municipal and district courts, she frequently handles OVI/DUI, theft, domestic violence, assault, and every traffic charge under the code. An ardent advocate, Jodie has successfully litigated and negotiated thousands of cases within court systems all over Ohio and Kentucky but particularly the Greater Cincinnati and Northern Kentucky court systems.

Law is a second career for Jodie. Prior to attending law school, she was the director for a large AT&T call center facility where she led a team of over 120 associates and 8 managers frequently recognized as the highest rated in the nation. Jodie directed the successful transition of four Customer Care Centers throughout the country to consolidate into one office in Cincinnati. As a result, she was selected by top management to lead an effort in training and establishing systems to manage Global Emerging Market accounts, which represented 75% of the divisions business. She improved the sales metrics so significantly she was moved into a failing collections department. Within three months she increased current accounts receivable volume 16% on a volume of more than $109 million transforming the department to one of the most successful in the country.

Jodie is a frequent volunteer for the Legal Aid Society of Cincinnati. She has represented numerous clients in both eviction and domestic relations court. She was recognized by the Cincinnati Bar Association for taking an eviction case to a full trial where the VLP clients were awarded significant damages due to the host of illegal activities by the landlord. She is also on the Cincinnati Works, Phoenix Board which is designed to help felons acquire stable employment. Jodie has also provided CLE speaker services for the Greater Cincinnati Criminal Defense Association