The Difference between European Legal Expense and U.S. Legal Plans 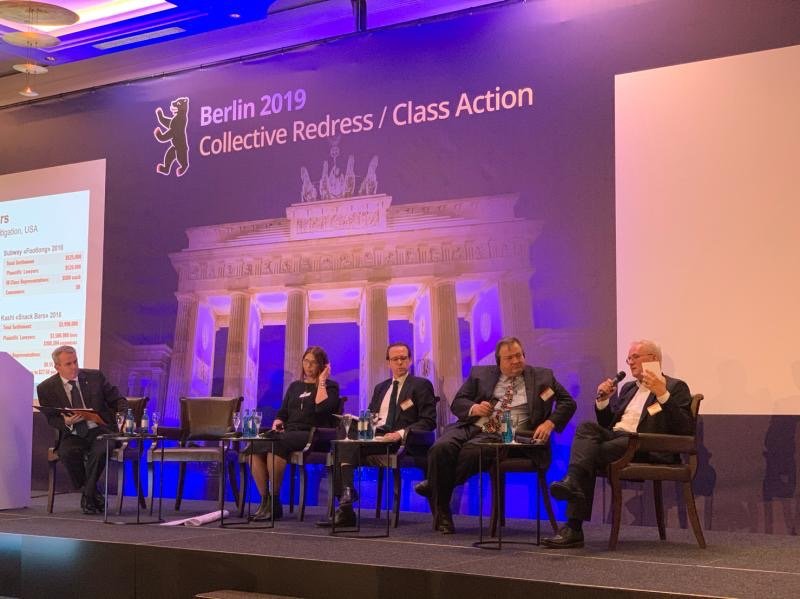 I had the pleasure of being invited to serve on a panel at this year’s RIAD Congress in Berlin, Germany.  RIAD is known as the International Legal Expense Insurers and recently celebrated its 50 anniversary.  Founded in Italy, it serves as the association of 50 legal expense insurance companies from 18 different European countries including South Africa, Canada, and Australia.

This congress was special in that RIAD changed its name and now is simply known as the Legal Protection Insurance (LPI).  This year’s conference was held the same time as the celebration of the 30th anniversary of fall of the Berlin Wall.  The congress was considering how LPI will deal with the E.U. proposal of the Class Action redress or Class Action lawsuits.  I had the pleasure of co-chairing a breakout session with Christoph Arnet (Switzerland) to discuss attorney’s views of the EU directive.  Finally, I sat on a panel with Sabine Eichner (Germany), Sven Bode (Germany), John Byrne (UK), Dr. Domenik Wendt (Germany) and Thomas Kohlmeier (Germany) wrapping up the varies positions on the Collective redress issue.

I have attended RIAD congresses in Brussels, Montreal, Dublin and finally in Berlin.  And it wasn’t until this Congress that I realized the main difference between European Legal Expense Insurance and Legal Plans in the United States.  It can be summed up in two words “Loser pays”.

Loser pays is the number one difference in U.S. and European law that has charted the progression of legal expense in Europe and Legal Plans in the U.S.    Legal Expense Insurance was founded first in 1917 in France for the drivers of the Les Mans motor car race.  European law did not allow contingency fees for attorney fee reimbursement.  In order to pursue a legal course of action, a litigant had to provide funding for his own attorney up front.  This situation alone, was the foundation of the creation of legal expense insurance companies in Europe.

Over the years, some counties developed some contingency fee or incentive fee arrangements.  It wasn’t until this century that England, Ireland, Holland, and Spain allowed some sort of contingency fee arrangement to compensate attorneys. You would think the development of contingency fees would equate European law with U.S. Law.  But it hasn’t.  The rule that loser automatically pays the other party’s expenses is the reason and the difference in the two bodies of law.  All European countries whether Common law, or Civil code law have had a long rule that the losing party will automatically be accessed and required to pay the winner’s cost and legal expenses.  This rule has prevented many litigants from filing lawsuits out of fear of losing and paying loses.  The U.S. counterpart doesn’t have this automatic rule.  For the most part, a counter claim or cross action is required to initiate the loser of a suit to compensate the winner.

The U.S. tort law was allowed to develop along a free enterprise system with contingency fees.  In the U.S. , lawyers assess accident injury cases as business propositions.  This business contingency relationship is a new thing for some European attorneys.  However, the Loser pay rules still applies in Europe, and has a very limited application in the U.S. on the most outrageous cases.  Therefore, litigants’ have a free reign to sue companies and individuals with legitimate causes of action without fear of paying costs and fees if they lose.

Because of this long-established rule, litigants have been terrified to drive on European roadways without insurance that covers for damages and injury.  The same goes for legal expense insurance that will cover the injured’ s legal expenses for his attorney prosecuting a case, and any costs for depositions or discovery.  This legal expense insurance also covers the cost of any potential loss of a case for the opponent’s attorney fees and costs.  These situations do not currently occur in the United States.  Here in the U.S., the litigant has very little risk involved with a contingency fee agreement.  The costs and the attorney’s fees are deducted upon payment of the claim.  In the event, no counter claim or malfeasance is found on the litigant’s part, the losing party will not be required to pay any losses out of pocket.

The loser pays rule developed the need for Legal expense insurance throughout Europe.  As legal expense Insurance developed over the last 100 years, most of these products started covering other legal services for traffic ticket defense, wills, divorce, and civil actions.

The U.S. legal plan history started 50 years later.  None of the U.S. jurisdictions were saddled with this oppressive “Loser Pays” rule.  Legal plans developed more as Auto club plans developed in this country.  Legal Plans do not pay out of pocket legal expenses.  Nor is there the ongoing threat of paying the winner of any suit legal fees and costs.  The U.S. model developed more as an employee benefit model to cover traffic tickets, wills, divorce and other routine civil actions.  These U.S. plans become a source of access to legal lines for members.  The group plan model allowed large members of a company, or Union to pay discounted monthly fees to a plan that would provide a lawyer for these services.

The loser pays rule caused the European business model to develop independent of the U.S. legal plan model.  The European counties have very high numbers of participation with Legal protection.  In these counties, the consumer attitudes are more equivalent to consumers need to own health insurance in the U.S.  The fear of losing and paying outrageous attorney fees and costs to an opposing litigant is a real concern for EU. Consumers and has been for a century.

On the other hand, American consumers view the relaxed American rule in a different manner.  Legal plans are viewed more like a company’s additional benefit.  But they aren’t viewed in the same light as health insurance.  But this view is changing.  Legal plans are growing in the U.S. And in the areas of commercial drivers’ legal plans and gun owner plans, they are viewed as a necessity to protect the consumer from real legal exposure.  Commercial drivers need plans to provide attorneys to protect their Commercial driver’s license and employment.  And Gun owners need protection to protect their 2nd Amendment rights to bear arms.  These ongoing daily fears and concerns cause U.S. consumers to view the need for these legal plans more like they view Health insurance.

I doubt that any of the U.S. jurisdictions will ever adopt and pass automatic rules for loser pays. In the event, the insurance lobby or corporations succumb to liberal legislation that adopt loser pays, then European Legal Expense Insurance model would develop in the U.S. because of this new need.  In the meantime, legal plans in the U.S. will develop based on the unique needs of the individuals that have these specific legal problems.

Send Email to The Difference between European Legal Expense and U.S. Legal Plans: